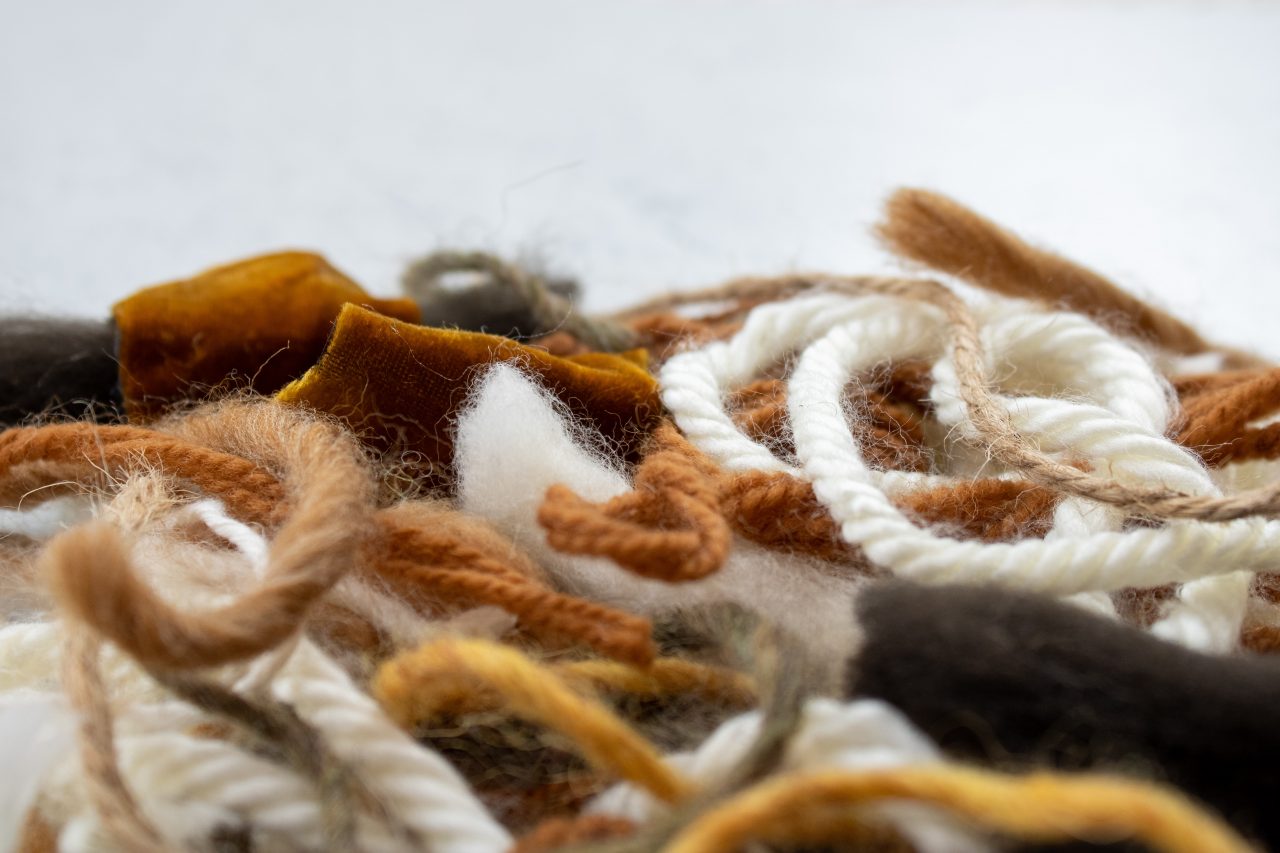 Biosynthetic fibres are synthetic fibres used in the manufacture of textiles, that are wholly or partially sourced from bio-based feedstocks. That is, some proportion of their carbon content comes from biological organisms. Biosynthetics could be more accurately called “bio-based synthetics”. In general, with this phrasing we are referring only to the fact that the material is in some proportion sourced from bio-based feedstocks, and not necessarily suggesting anything about its properties, such as biodegradability. The two are often conflated, but in this case, there are many examples of biosynthetic fibres which are not biodegradable. With this out of the way, we will use the more accurate term bio-based synthetic going forward.

But what does the term ‘synthetic’ refer to in the first place? Polymers are long chains of molecules, which can be formed either by nature (such as the cellulose in cotton), or by humans. In the latter case, these are typically referred to as synthetic polymers. Plastics are a subset of synthetic polymers which are moulded and shaped to a specific form (such as a film, or a solid object) and perform a key structural role in a product. In the textile industry the term ‘synthetic fibre’ is used to refer to what could also be colloquially called a ‘plastic fibre’.

Finally, it is important to distinguish between the bio-based content of a polymer. In some cases, a mixture of molecular building blocks from petroleum and bio-based resources are used in their production, often for lack of commercially available bio-based alternatives. In this case, we can refer to the resulting polymer as partially bio-based, as opposed to fully (i.e. 100%) bio-based. As such, not all fibres which are said to be biosynthetics or bio-based are necessarily fully bio-based – reading the small print is always important. The bio-based content (typically by weight, as a percentage) can be measured in a laboratory and verified by certifications from organisations such as TÜV.

This article continues our series about bio-based materials in fashion. For the first article in in this series see Innovation in Man-Made Cellulosic Fibres.

What Are The Main Types of Biosynthetic Fibres?

Depending on the specific chemical structure of the polyamide, the actual bio-based content of the polymer may vary from around 60% (partially bio-based) up to 100% (i.e. fully bio-based). This is because the synthesis of some types of polyamides require additional molecular building blocks, which at present cannot be sourced from biological feedstocks.

Just like conventional synthetic fibres, bio-based polyamides are not typically biodegradable. In some cases, they have better performance properties than traditional synthetic fibres such as Nylon, although in other areas, such as dyeability, there are potential drawbacks. Most data suggests that they have a significantly better carbon impact than fully petroleum-based polyamides. In this case, the benefits of the decreased environmental impact and the specific performance characteristics that are needed should be carefully balanced.

There is also the possibility to make conventional Nylon 6 from bio-based feedstocks, which would be a true ‘drop in’ replacement for petroleum-based Nylon. Although not currently commercial, work in this area is ongoing. Companies such as Genomatica have created processes for producing key molecular building blocks for Nylon 6 via microbial fermentation, using special genetically modified microbes.

Polyethylene terephthalate or PET is the most common fibre typically referred to as ‘polyester’ in the fashion and textiles sector, although polyester does in fact refer to a wide class of synthetic polymers with many different properties

Whilst the sustainability case for bio-based Nylons is a lot clearer, bio-based conventional polyester (PET) is a peculiar borderline case. Many studies show that partially bio-based PET has a similar, or sometimes worse carbon impact than petroleum-based PET.

PTT is a partially-bio based synthetic, similar to conventional polyester, but with more stretch characteristics. As only one of the molecular building blocks is bio-sourced, the bio-based content is 37%. It is marketed by Dupont primarily under the Sonora brand.

PBS (polybutylene succinate) is one polymer that can also be made as either a petroleum-based, partially-bio based, or even fully bio-based alternative. Although PBS fibres are not widely available on a bulk scale, some innovators, such as Kintra Fibers, are attempting to make fibres based on this base polymer. Variations of PBS can be made by tailoring the mixture of molecular building blocks, which enables a range of properties. PBS can be compostable in some (for example, industrial composting or home composting) environments, depending on the specific composition of the polymer.

PLA is not currently widely used in garments, although it is currently one of the fastest growing bio-based polymers in the market generally, due to its growing popularity in packaging. In can indeed also be used to make fibres, and PLA filament is already widely used in other applications, such as teabags. PLA can be used to make a staple fibre or a continuous filament and have been used in both knitted and woven fabrics. PLA has also been studied for blending with other fibres such as cotton, wool or lyocell and may be used for other apparel items including footwear and bags. Innovative textile companies such as Pyratex and Noosa are offering textiles made from PLA for garment applications. Typically, the sugar used in the production of the PLA building blocks is obtained from corn or sugarcane.­­­ It is 100% bio-based, and has been showed to be compostable, but only typically under specific ‘industrial’ composting positions, meaning it will not readily decompose in the environment or in a home compost heap.

PHAs are a class of polymers which are directly produced by certain bacterial fermentation processes. In comparison to other biodegradable polymers, the biodegradability tends to be much more favourable in conditions found in home composting as well as in the marine and soil environments. However, despite their long history PHAs have struggled to find commercial applications and there have been noted difficulties in creating durable fibres from them. However, they are certainly in the spotlight as potential replacements for conventional synthetics.

Polyurethanes are a wide family of synthetic polymers, of which Elastane (Spandex, or Lycra) is important for the fashion and textiles sector as a key stretch-providing fibre. Polyurethanes are also important in creating foams and faux leather materials used in footwear and accessories. Partially bio-based polyurethanes (typically in the range of 30-40% by weight bio-based) are commercially available for many different applications.

The LYCRA company previously had a partially bio-based elastane announced in 2014, which has since been discontinued. Thus, bio-based replacements for elastanes are currently very scarce. However, partially bio-based polyurethanes for shoe midsoles, and soles, as well as faux-leathers and synthetic rubber materials are all available. We will be exploring this topic more thoroughly in future articles. Currently, however, there is not much of a path for making conventional polyurethanes fully bio-based, so there is a limitation on what can be achieved, although novel alternatives based on natural polymers such as lignin are being explored.

What Is the Future Of Biosynthetic Fibres?

Biosynthetics (or bio-based synthetics) are available commercially now, and we will expect to see other novel biosynthetic fibres products in the near future, too. However, their production volume relative to conventional synthetics is still relatively small.

Their range of properties is wide, and not all examples are necessarily preferable from a carbon-footprint point of view. In general, however, they are comparable in properties to conventional synthetics, so they would typically find applications where synthetics are currently used – especially in the sports and outdoors sector.

Importantly, the impact of areas outside of carbon should be considered – chemical usage due to agriculture and its effect on eutrophication and other environmental impacts should also be considered. The environmental case for choosing a bio-based synthetic therefore needs to be taken on a case-by-case basis. Overall, breaking the link between material consumption and fossil-fuel extraction is a wider objective, which substituting conventional synthetics by bio-based synthetics can certainly contribute to, and in most cases bio-based alternatives will be a better environmental choice long term. However, as always, with the introduction of new materials the end-of-life disposal should always be considered. For drop-in bio-based alternatives this is less of an issue, but with a proliferation in novel material types comes an increase in the complexity of end-of-life textile recycling.

Would you like to learn more about this topic?

Circuvate will be hosting an exclusive, paid masterclass on the chemistry, properties, sustainability and circularity of bio-based synthetics as the first part of our 4-part “Innovation in Bio-Based Materials For A Circular Economy In Fashion” course. The course content will cover a breadth and depth of topics that are not covered in other university or professional education courses.

This course is aimed at professionals with at least some introduction to sustainability and circular economy concepts, with a basic understanding of high-school level chemistry.

previous
How Do We Create A Truly 'Circular' Economy In The Fashion Industry?